"Summer in 3-D" movie debuts in a limited engagement.  I heard somewhere there's only seven showings over the next couple of weeks, so if you want the full blown movie theatre experience, you'd better grab it while you can!  The end credits of the movie proclaim KMart as the retail partner for the movie (which, honestly, seems a little cheap to me.  But I'm a Walmart girl...) So anyway, I suspect that means it will be on DVD shortly thereafter,

As for the movie itself, I saw it about a week ago out in Franklin, TN.  They did a small screening for about 40-50 of us.  Mac McAnally

was sitting in the row in front of me, which I thought was incredibly cool.  Kenny came out and said hello, but didn't stay to watch it.

I've seen Kenny a bunch of times, including at both Madison Square Garden and Gillette Stadium, so I'd actually seen him in 4-D already.  ;-)  I would say Boston was the predominantly featured show, although there were shots from all the stadium shows, and a couple of songs cherry picked from other places.  ("Better As A Memory" in Indy was particularly cool.)

The 3-D effects were pretty neat.  The concerts were actually shot in 3-D versus being converted later.  Things don't fly out of the screen at you a la Avitar or anything, but it makes for some neat effects.  I think the fans who can't get enough Kenny are going to love this, but the real audience needs to be up and coming artists.  The movie tells a story of a kid who had a dream and chased it, and used technology to take it beyond anything he'd ever dared to dream.

If you've never seen Kenny in concert, his staging is amazing.  And he runs around and rocks a stage like someone 15 years younger.

Of course, I can't talk about Kenny without talking about his ACM performance of  "Ain't Back Yet."

It's my personal belief, that when you look at the overall criteria for Entertainer of the Year ~ sales, airplay, concert attendance, multi-media exposure, promotion of country music outside of the genre ~ Kenny deserved to win.  I know Taylor is a close second, but she hasn't had as many country hits lately, and she sure didn't sell as many concert tickets.  But I knew when it came to the Carrie Underwood

fans, they are a force to be reckoned with.  Face it -- without the fans, none of us would have ever heard of Carrie.  So I wasn't surprised he didn't win.

But I was completely shocked that he lip sync'd his performance.  I've yet to hear an explanation as to why.  Maybe he was sick, maybe they were juggling the show rundown, maybe that's just a hard song to sing.  I don't know.  But I know if Taylor Swift

had gotten up there and lip sync'd the press would have been ALL OVER her.  Yet somehow, with Kenny they're just shrugging their shoulders and saying "I don't know, no one's talking."

.  Which of course, meant she stopped by the Sirius XM HQ too.

I'm sure you are dying to know what she was doing there and when you can hear it.  But of course... there's not been any official announcement yet, so I probably shouldn't spill the beans.

But... you guys know I love you best, right?  So let me just suggest that Mother's Day weekend would be a fabulous time for some 90's Country & More on your satellite radio.

If you haven't gotten your copy yet, I think it's only appropriate that you click on Mrs. Brooks' smiling face over there and order one through my Amazon link.  After all, it's partially her fault that I'm trying to raise money for a plane ticket to D.C. so that I can do the Komen 3-Day for the Cure in October.

I can't wait until I see her next and ask her what the heck she's gotten me into!  LOL
Posted by Producer J. at 8:36 PM 4 comments:

Coming to a Bookstore Near You!

Ok, it's not coming for another month and a half, but there's lots of anticipation and speculation about Chely Wright's upcoming memoir, Like Me.  What exactly will she be confessing?

I don't have any inside scoop, but I am excited to read it.  I love Chely, she's never been anything but completely wonderful to me.  And one of my favorite albums ever is The Metropolitan Hotel.

So much so that I bought a t-shirt, and I almost never buy merch.  There was so much great music on there... gutwrenching sometimes... but great. "Southside of Lonesome"... "What If I Can't Say No Again"... good stuff.  A very raw song for her mom.  And then I always liked "It's The Song."  I'm a nerd like that... I like songs about the music business.  "I Got Him Ready For You" is another good one.  Sassy.

Sorry, I got distracted. There's new music coming too... the album is called Lifted Off The Ground

.  They haven't serviced a single, although I hear there's a song floating around out there that's being referred to as a single.  I'm guessing it's a soft launch, going to secondary (smaller) radio stations first.

Anyway, both projects hit stores May 4th.  Looking forward to putting the rumor mills to rest and reading Chely's story myself.  How awesome must it be to have a BOOK in stores?  Completely different than a CD release day I would guess.

Go Chely!  And don't forget if you're coming to CMA Music Fest, the 10th Anniversary Reading, Writing and Rhythm concert is BACK this year!  Sarah Buxton, Bucky Covington, Rodney Crowell... someone else whom I'm forgetting because it's 12:15 in the morning... Tickets on sale now!
Posted by Producer J. at 11:19 PM 7 comments:

My job is SO tough some days! 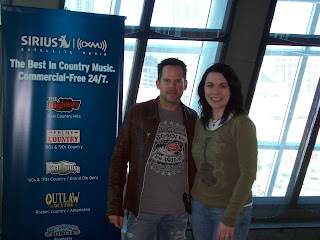 How much did I love hanging out with Gary Allan?  A lot.  He's so loose and fun... great sense of humor.  He came in and did a Guest DJ session for us the day that Get Off on The Pain

I have a lengthy piece that I've read and re-read over at my 3-day blog... do you mind looking it over and telling me if I missed any spelling / grammar errors or if something just doesn't make sense?
Posted by Producer J. at 8:39 AM 3 comments:

Lady A At the Ryman

Check out these awesome pictures Sandi took at the Lady Antebellum

show at the Ryman Auditorium. The one of them at the piano is definitely my favorite! 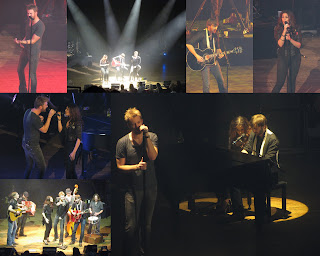 We saw them on the second night of their two night run. Unlike most shows I go to, where I'm in a section full of people I know from Music Row, this show I was smack in the middle of a family reunion. Hillary's grandparents were there, her mom was running around playing social butterfly, I know Charles and Dave both had a ton of friends and family there too. They played about an hour. My favorite song off the new album is still "Perfect Day." It's in contention to be the next single.


The after party was the most productive schmooze fest I've been to in ages. Spent time talking music with the Capitol promo guys, whom I love. Introduced Sandi to Hillary, Charles, & Dave. Got to catch up with Charles' wife, whom I hadn't seen in a couple of months. (They had 7 people staying at their house, including Charles' brother Josh who slept on the floor! LOL) Had a very lengthy conversation about new music with Mike Dungan, where I continued my campaign for "All I Want"

to be the next Darius Rucker single. (I'm gonna lose that one, but I am still waving the flag.) And I stood and giggled as Sandi and Bob Doyle chatted about Vegas. 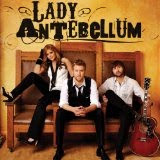 Those of you who are new to the Lady A bandwagon due to their recent crossover explosion, do yourself a favor and go buy their first album.

Note... by looking at this picture, you hereby agree that if you know my parents, you shall not mention it to them. I'm going to get it printed and send it to them as a surprise. They still don't know about THE night.

It's a work in progress... still don't have the layout and the background quite how I want it. But you guys get the exclusive first look!
Posted by Producer J. at 11:15 PM 6 comments:

Cool Places To Hang in Cyberspace